Over the past couple months, I’ve been working with Rohan Varma on a PyTorch implementation of DistBelief.

DistBelief is a Google paper that describes how to train models in a distributed fashion. In particular, we were interested in implementing a distributed optimization method, DownpourSGD. This is an overview of our implementation, along with some problems we faced along our way.

Please check out the code here!

Update: Our project is now on PyPi! You can install our code by running pip install pytorch-distbelief.

A brief introduction to Distbelief

For some context, I’m going to briefly explain DistBelief. You can check out the original paper here. Distbelief describes an entire framework for parallelizing neural networks, but we focused on the primary concept of the paper - two distributed opitimization methods, DownpourSGD and SandblasterLBFGS.

We only implemented DownpourSGD, which is much simpler.

In DownpourSGD, there are two core concepts - a parameter server and a training node. 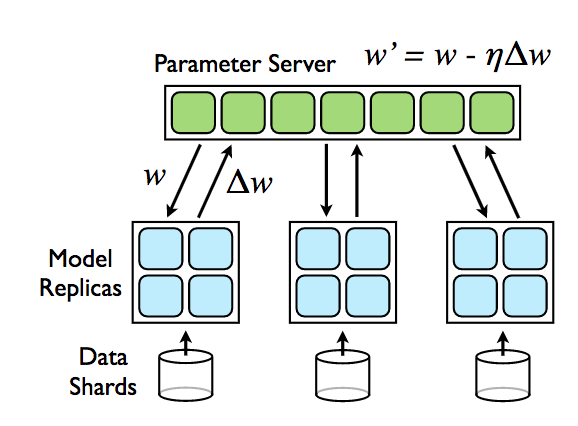 The paper provides some pseudocode for the DownpourSGD client. 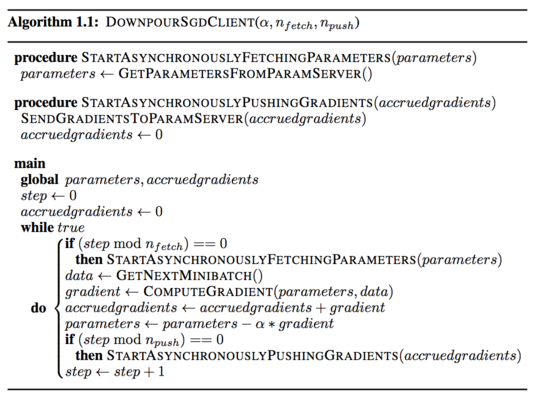 We did some cursory research, and found a couple of great articles and tutorials.

Originally our plan was to use the gevent actor model to implement DistBelief. However, we quickly realized that the way we had envisioned it, we would need the training node to both pull gradients and also run the training step at the same time, while accessing some shared memory.

This is a big problem, because everything inside an actor is supposed to happen sequentially- which meant we couldn’t do asynchronous operations within an actor. What’s worse - if we sepereated these two steps into two different actors we would have to spend large amounts of data back and forth, increasing our communication overhead.

We figured an easier system would be to relax our system, so instead of implementing DistBelief purely with actors, we build a more generic message passing system. Our implementation breaks one of the cardinal rules of the actor model, which is to never share state between actors.

Our idea was to first build a simple message passing system, and then implement a series of message listeners, with which we could implement DistBelief.

We both had some experience with PyTorch, so figured we could use PyTorch’s distributed send and recv commands (along with their async counterparts, isend and irecv) to build a system to pass around gradients/parameters data.

However, we realized that we needed to not only send tensor data, but also some metadata with our message. This metadata would be easy to add in a JSON for example, but adding it into a tensor required a bit more thought.

Firstly, we realized that we couldn’t send a message for each parameter group, as we needed to have a set size for our message in order to use recv properly.

This tensor is the payload of our message. When we send this message, we prepend two extra elements. Element 0 is a MessageCode, which describes the intended message action, while element 1 is the rank (ID) of the sender. Our message length is thus a tensor of size \(N_{params} + 2\).

Next we implemented a base class that described a MessageListener (similar to an event loop), as well a utility function to make sending a message easier.

By extending receive, we could implememt both our parameter server and our DownpourSGD client.

Defining our messages and handlers

With this in mind, we sketched out the different messages that the corresponding handlers would send/process.

We settled on three message types and this structure: 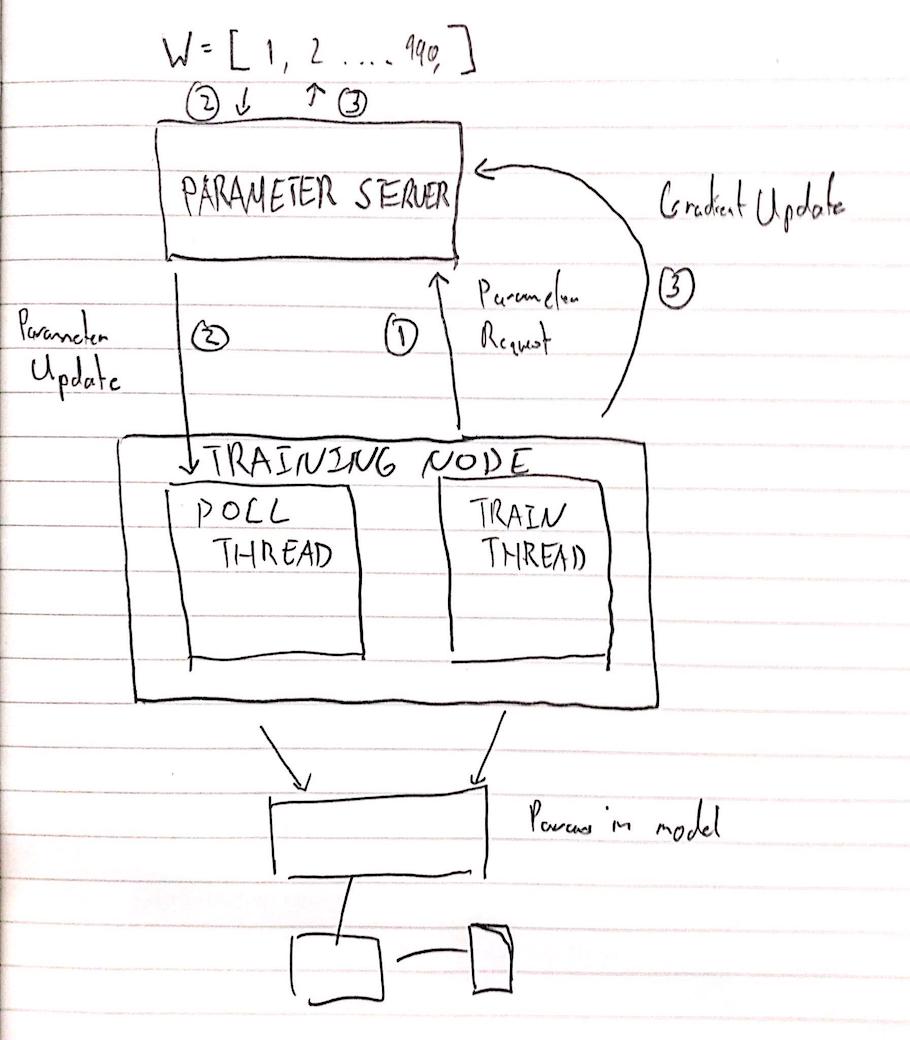 Here 2 and 3 should happen concurrently.

There are two messages that the parameter server handles:

The parameter server stores the model parameters in their squashed form, which makes processing these two messages pretty simple.

Our training node consists of two threads, the training thread and the listener thread.

The listener thread extends MessageListener, like the parameter server, however it only takes a single message ParameterUpdate.

The training thread is the native PyTorch entrypoint, and is almost exactly identical, except it will ocassionally send either a GradientUpdate or a ParameterRequest to the parameter server.

Here you can so a big downside of our implementation - a ParameterRequest is the same size as a GradientUpdate, but a ParameterRequest does not need to be that large. We waste some communication overhead by sending a large tensor we do not process. This is a shame, but we couldn’t figure out a clean way around this, so it’s just something to keep in mind for now.

With this, we had a simple prototype. At this we were primarily concerned that we would be able to train a deep neural network, and weren’t sweating about performace. To test our code we trained LeNet on MNIST, and plotted the test accuracy/loss. 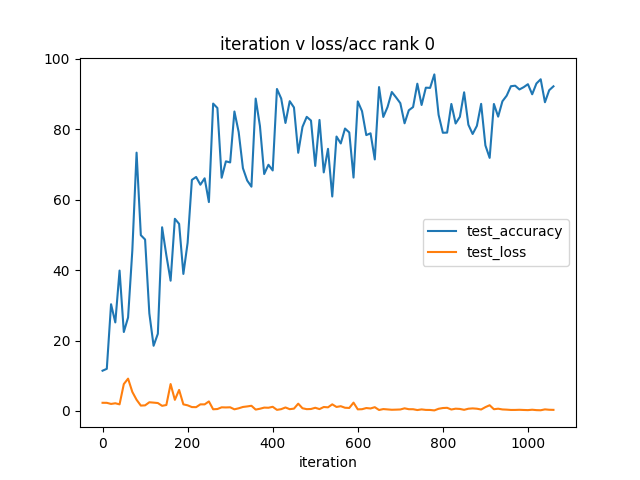 It’s an ugly graph, but training accuracy clearly rises. At this point we were satisfied with our design and focused on optimizing our prototype.

The first thing we did was refactor the project to follow a more consistent project structure. We moved everything into their respective places and broke up a single massive utils.py file.

Next, we looked at implementing DownpourSGD as a PyTorch optimizer. It turns out there is a base Optimizer class natively in PyTorch. This class really only has two methods, __init__() and step(). We started by copying the native SGD code and then added in DistBelief support.

We extend __init__() by letting it take in a model definition as an argument, as well as the list of parameters. We need this in order to start our DownpourListener, which we do in a separate thread in our optimizer constructor.

Each time we take a step, we see if we have hit \(N_{pull}\) and if so, issue a ParameterRequest to the server. Since we send messages using isend, we continue as normal. Once the server has processed the message, it will issue a ParameterUpdate, which will get picked up by the DownpourListener and update the model params.

We also accumulated our grads until we hit \(N_{push}\) upon which we send a GradientUpdate message to the server.

This allows us to use DistBelief very simply, by just changing the optimizer used.

That actually was very helpful, as we were able to pull down any arbitrary model and train it with minimal modification. We ended up pulling an AlexNet model definition and some CIFAR10 benchmarking code to benchmark our code.

Iterating on our prototype 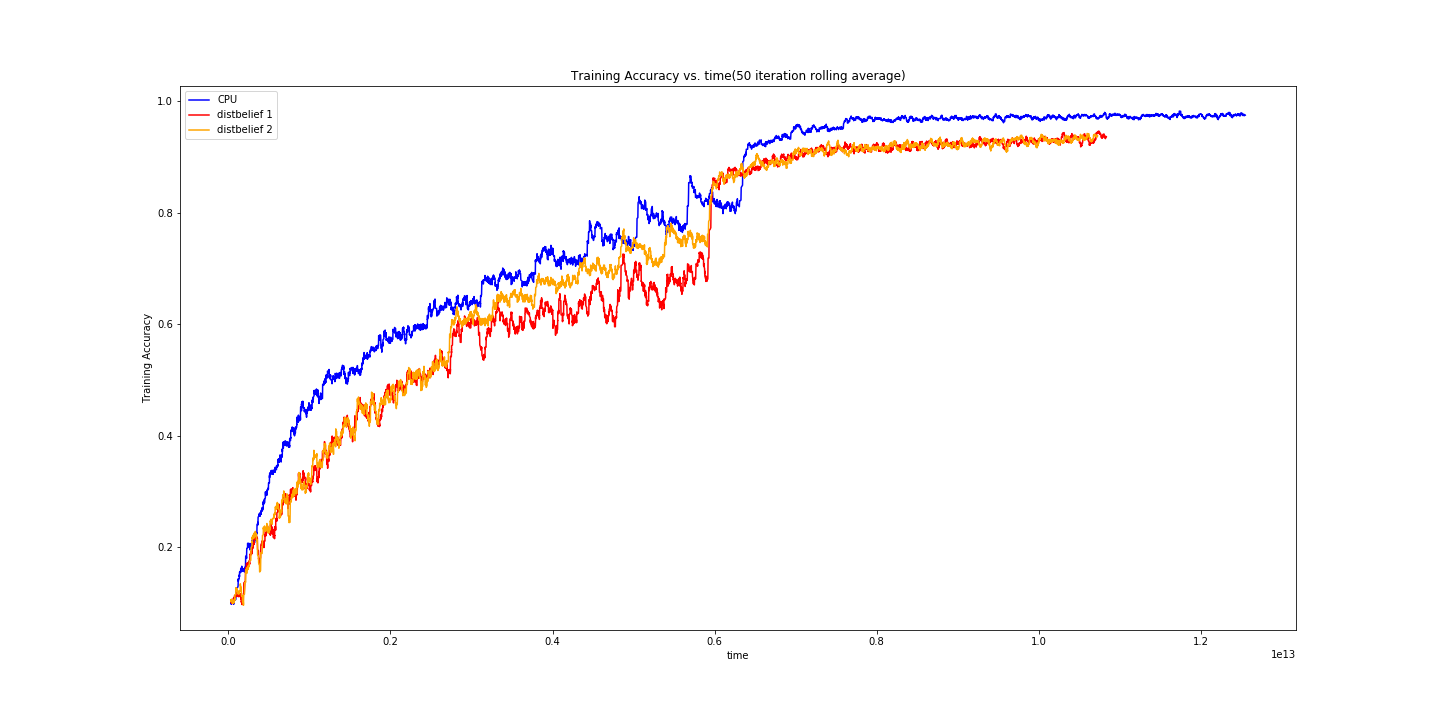 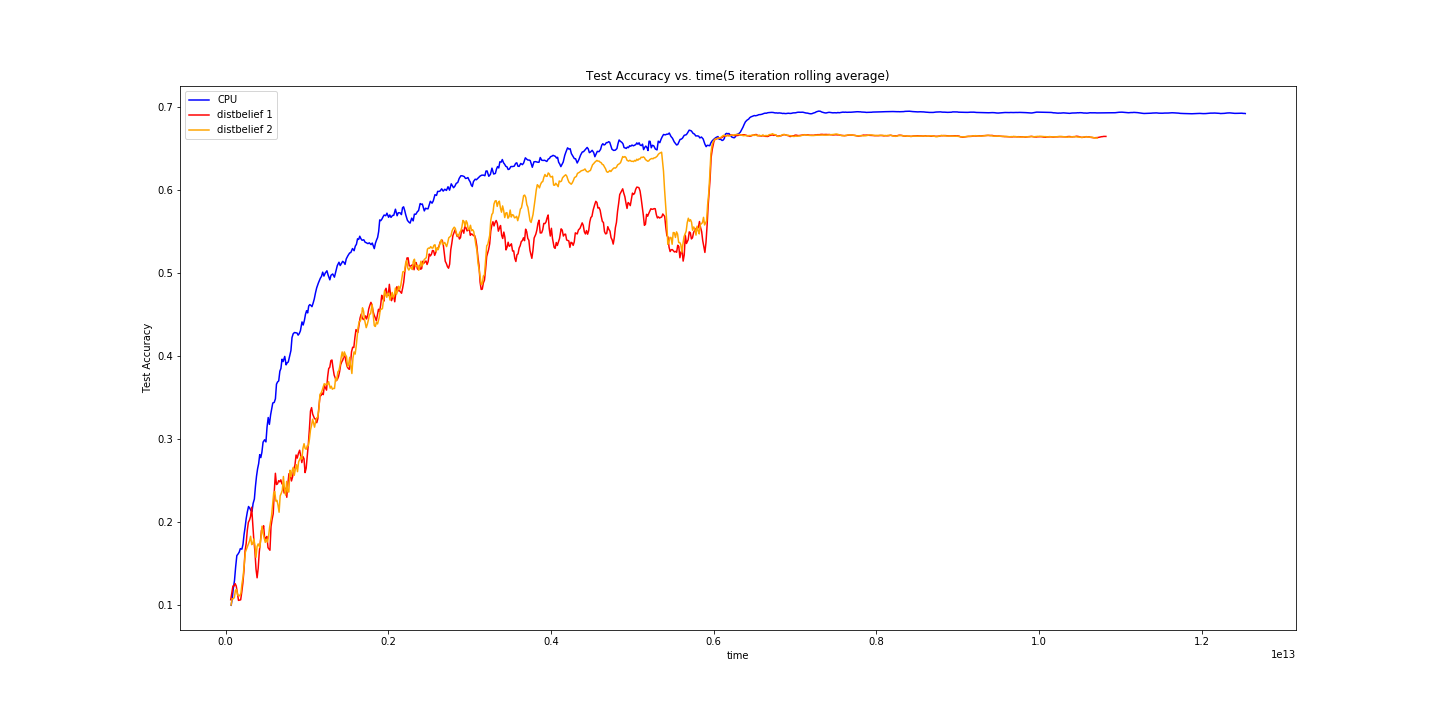 We were a little concerned here - it looked like our implementation was suffering. We took this time to explore a bit more, and eventually found this paper analyzing the delayed gradient problem.

The delayed gradient problem exists because a node may be running gradient descent on a set of parameters that is “stale”. In this case the gradients it produces may just add noise and not contribute to lowering the training loss.

It seemed that there was a much better chance at convergence at smaller frequencies, so we dropped \(N_{pull}\) and \(N_{push}\) to 5. It was previously set to ten as we were testing by running all 3 processes on a single machine, and the training nodes would rob the server process of resources, causing it to not be able to process messages fast enough.

Dropping the push/pull frequency had a immediate effect on our learning curve. 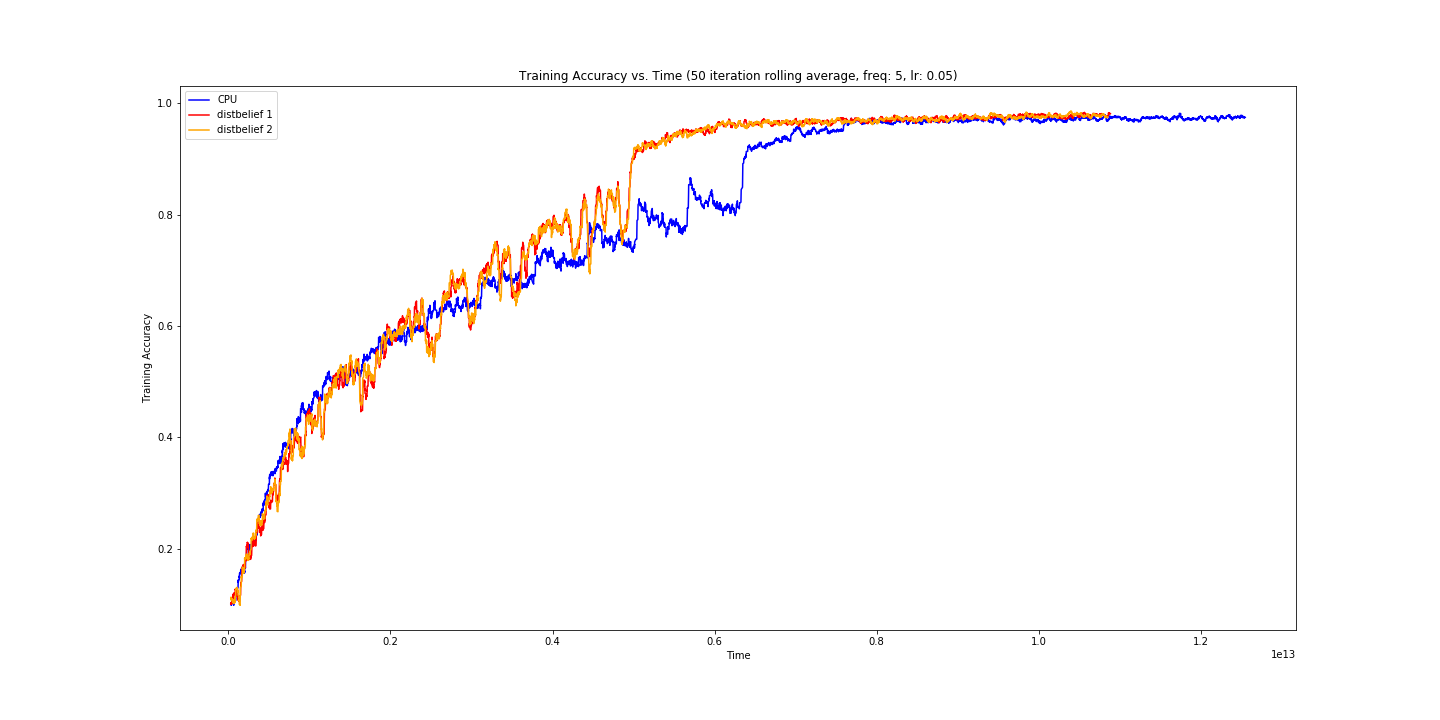 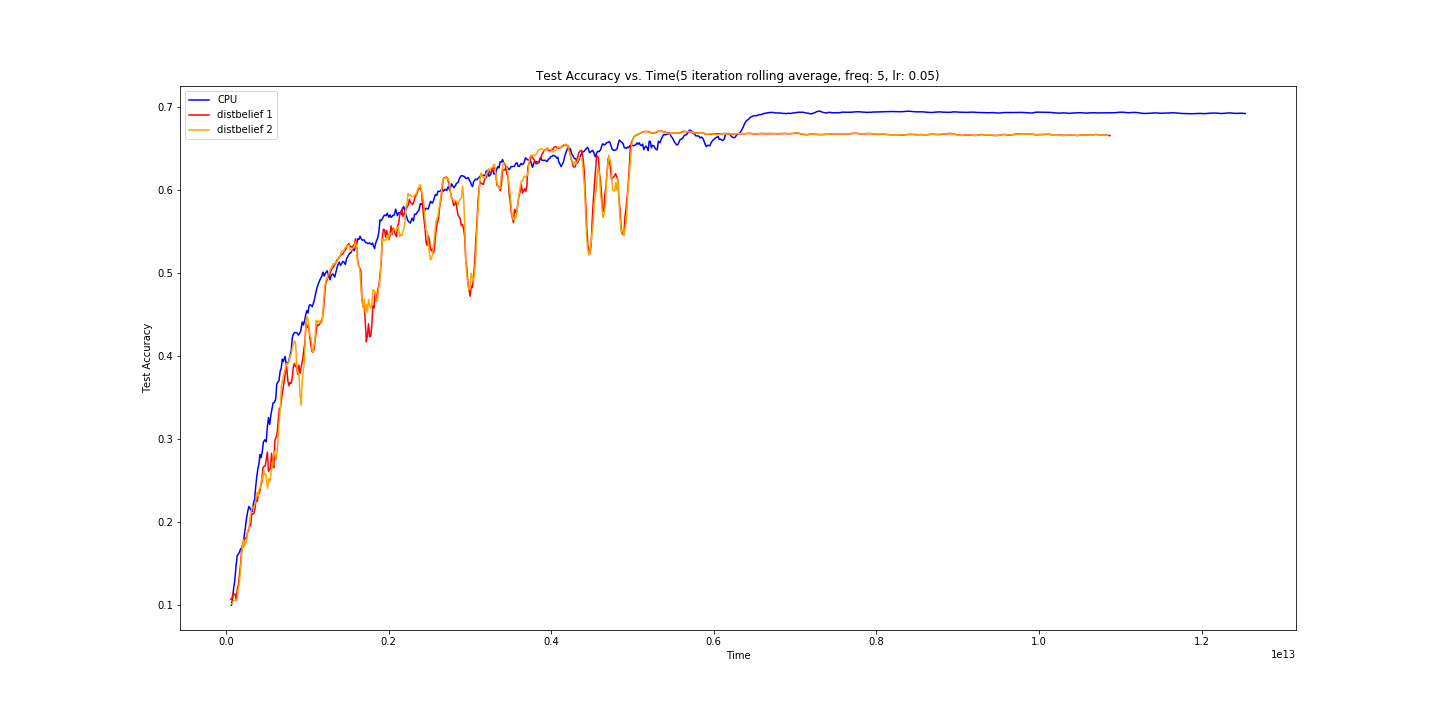 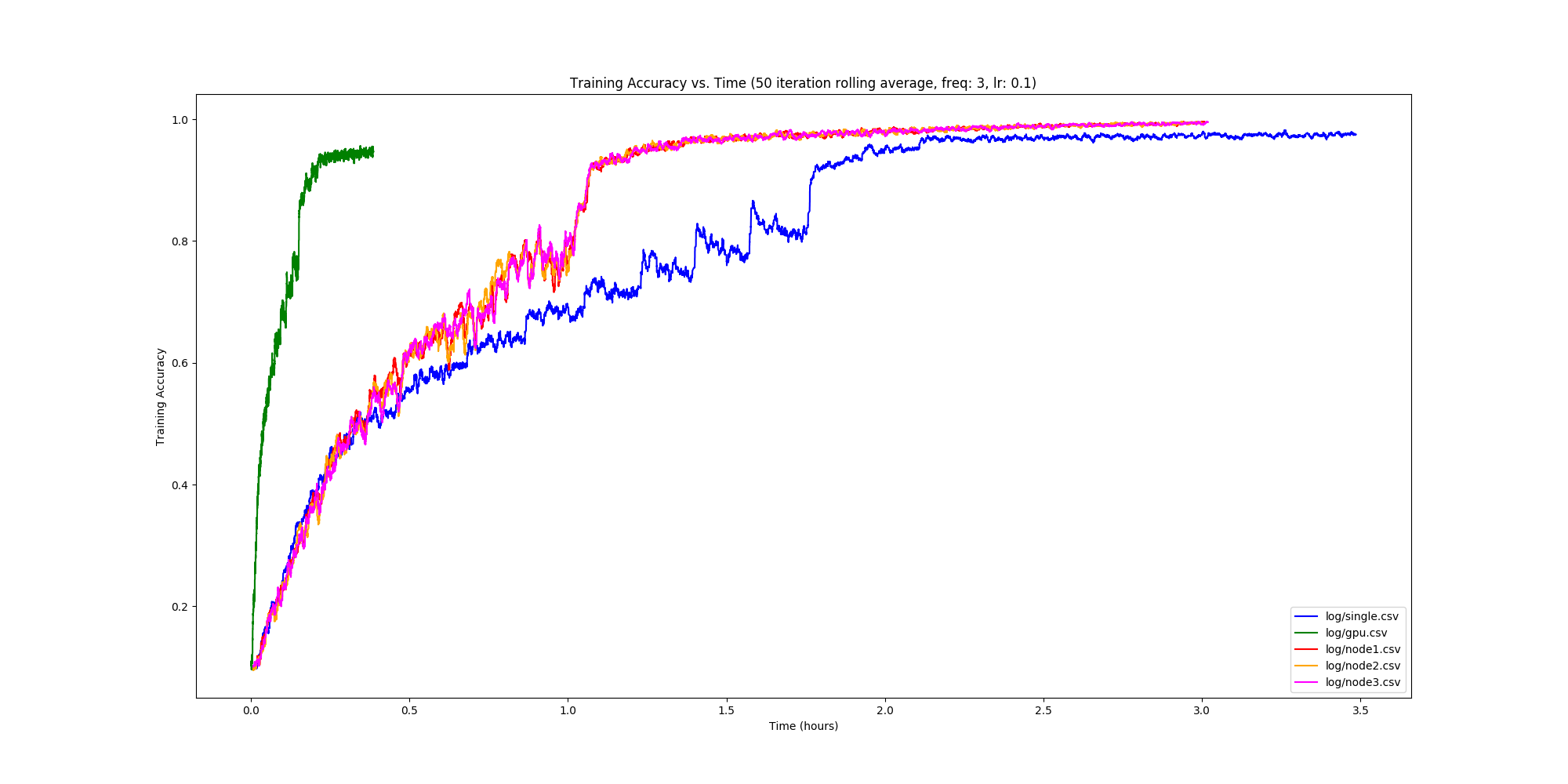 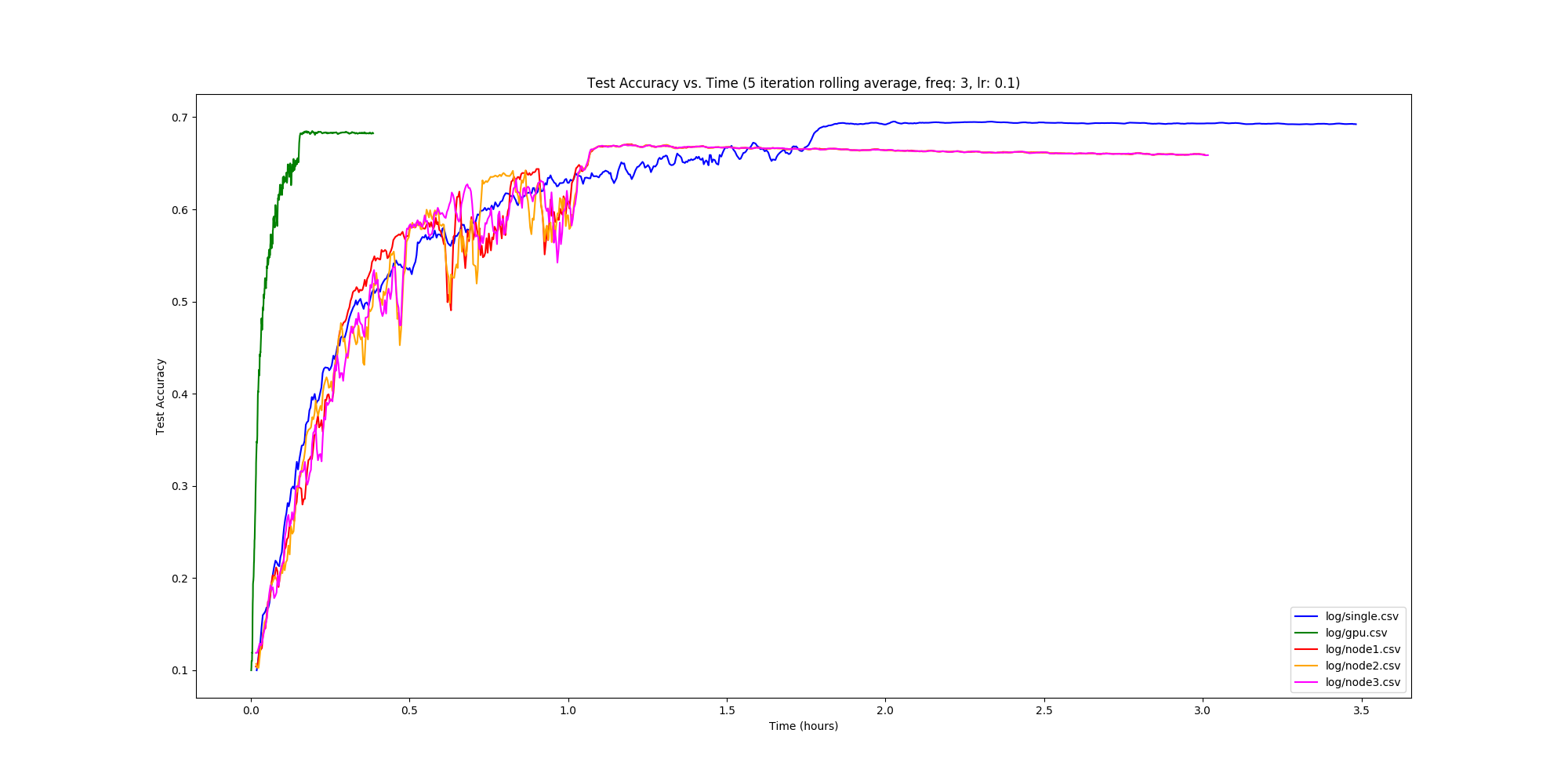 So it turns out GPUs are fast, but we’re faster than single node CPU training though by roughly an hour! What’s more than that - we’re faster than a 2-node distributed approach, which bodes well for the scalability of our system. This is great as initially we were very concerned about the communication overhead. It seems like this wasn’t too big of a problem thankfully, which was slightly unexpected as we’re using TCP to send the tensors back and forth.

This project was a blast to work on, and I was pretty suprised with what we were able to achieve in the end. Huge thanks to Rohan Varma, I was constantly bouncing questions and theories off of him when we were implementing this.

Some future improvements that we’ve been considering: